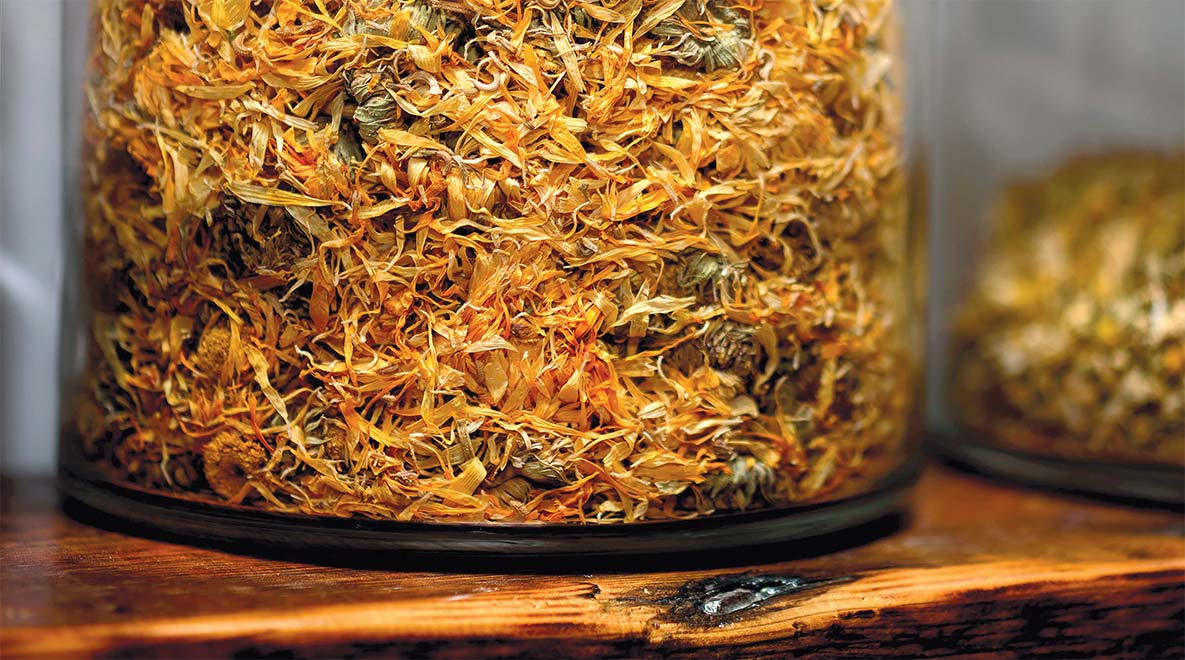 Walk into Plant Base Market, and you’ll see much of what you’d find at any grocery store: Piles of produce, neat shelves of pantry staples, household goods, a café counter at the back.

There are no mesh sacks encasing shiny onions or leathery skinned avocados, plastic containers of pasta or glossy tubes of toothpaste. Absent are rolls of crinkly plastic baggies to pack up fruits and vegetables. You won’t find disposable tubs filled with prepared foods or foil-topped cups of yogurt in the refrigerated case, and there’s nary a snack pack in sight.

That’s because Plant Base is a package-free market. Every item, from produce to pasta to paper towels, is either sold without packaging or in containers that can be reused.

It’s a concept that owners Andy Hertz and Dhruva LaTorre are constantly explaining to shoppers who wander into their store in the Bergen-Lafayette neighborhood of Jersey City. Hertz might sit at one of the half dozen bar stools and discuss the impact of plastics in our oceans for close to an hour, or explain that to take home grains, nuts, spices, tea or more viscous staples such as olive oil and agave, you pay by weight, renting a glass jar for a dollar or two or bringing your own container. Store-made laundry detergent, surface cleaner and deodorant can be refilled or come in glass jars, the 46-year-old will say, while some products, like bar soap, don’t come in packaging at all. Some merchandise isn’t new: The shop’s simple pentagon-shaped logo gets printed onto secondhand t-shirts.

And when hungry patrons make their way to the café counter, passing a display of compostable home goods in earthy hues, a pair of rustic camping hammocks and a table set up for a game of chess, LaTorre will explain what else they won’t find here: meat, dairy or anything made with animal products. Plant Base is vegan.

If the double whammy of package-free and vegan is a lot to take in for some shoppers, it’s a case the pair is happy to make. The Jersey City residents, who met while working for a local real estate developer, quickly bonded over environmentalism and animal rights. It wasn’t long before they started dreaming about opening a hub for healthy living to share these passions with others. They were set from the beginning on a vegan concept; as they looked into selling bulk items with as little waste as possible, their concept snowballed into the idea of a store with no single-use packaging at all, Hertz explains. 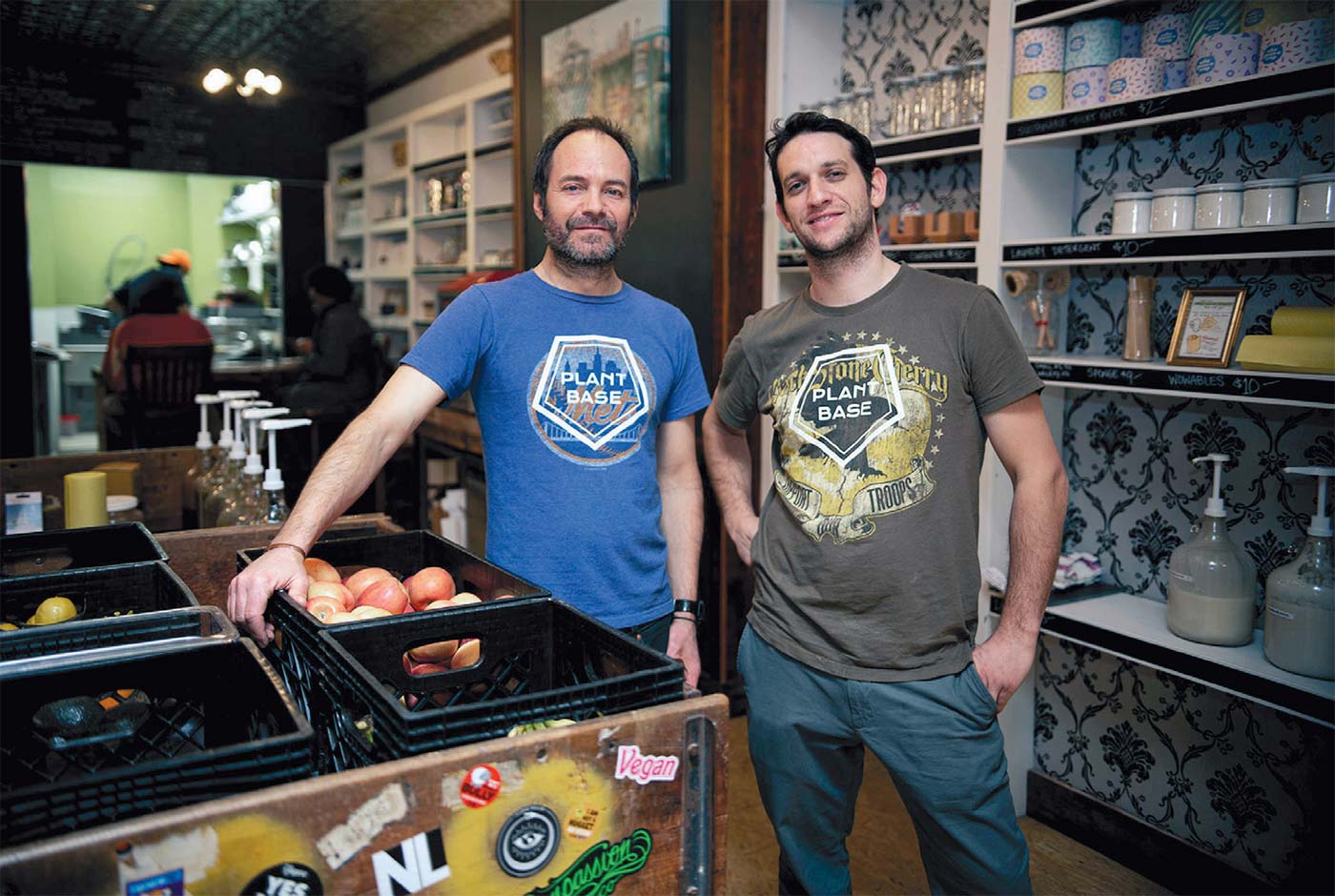 When a former bodega space became available in Hertz’s Bergen- Lafayette neighborhood—which has seen an influx of new restaurants, shops and condos in the last few years—they went to work transforming the 800-square-foot shop. They added a wall of bulk bins, expanded the small kitchen and added a vintage-style tin ceiling and printed wallpaper. The duo also tinkered with ideas for café entrées and searched exhaustively for suppliers who would work with their needs (such as sending goods in bulk quantities and in packaging they could reuse).

When they officially opened in August 2019, Plant Base joined a growing number of similar so-called “package-free” or “zero-waste” shops popping up from Colorado to California to Copenhagen. These shops are selling different kinds of goods in various formats— from small markets like Plant Base to mostly home and personal care products at Public Goods and Services in Seattle to all of the above at Precycle in Brooklyn. Each of these shops echews packaging in an attempt to chip away at the daunting amount of waste that’s piling up in landfills and oceans.

Containers and packaging, according to the EPA, accounted for 80.1 million tons of waste in the United States in 2017, with the average American creating 4.51 pounds of trash per day.

Statistics like these have caused fear—a 2019 survey revealed plastics in the oceans as a bigger concern for Americans than even climate change—and sprouted a movement. A cursory search on Instagram or Google for “zero-waste living” will turn up authors, bloggers and other zero-waste shop owners who purport to produce only a tiny amount of trash—as little as a single mason jar’s worth—over the course of years. Veganism, too, is inextricably tied to reducing waste and protecting the planet for LaTorre and Hertz, since animal agriculture is a proven major contributor to climate change. (They are equally passionate about veganism’s health benefits and ethical standpoints.)

Hertz and LaTorre do not expect perfection from their customers. “We need millions of people doing this imperfectly, not a few people doing it perfectly,” Hertz says.

This non-judgmental attitude has made regulars out of some neighborhood skeptics. They were drawn in perhaps out of curiosity or because of the dearth of nearby options for fresh produce. Now, they’re changing their lifestyles, LaTorre says. They’ve sampled tacos made with sundried tomato and walnut “chorizo” and mac and cheese made with house-made nut-based “cheese.” “People think, ‘I can do this, maybe I can make the switch,’” says LaTorre, 35. Even if that’s one plant-based meal a day, trying one new ingredient from the store at home or refilling one glass jar.

For Evelyn Ibarra, a leasing agent and social media manager who’s lived in the neighborhood since 2012, Plant Base is a welcome addition. She stops by a few times a week to shop for groceries or for a meal. “Everything is vegan, tastes good and is affordable. They’re really opening people up to what vegan food can be,” says Ibarra, who’s taken to recreating some of the flavors and recipes from the Plant Base kitchen at home.

Ibarra is not only eating better; she is wasting less. Instead of tossing bunches of lettuce and apples gone bad from a long-ago grocery haul, she is stopping in for just what she needs. Like many urban dwellers, Ibarra doesn’t have a car, so trekking to the nearest supermarket for a single avocado or red onion would be a hassle, if not impossible. Shopping at Plant Base, she says, has shifted her mindset. “It’s made me think about where I can recycle and reuse instead of producing [more waste],” she says, going beyond carrying around a reusable coffee mug or shopping bags. “I’m so conscious of it now.”

ANDY HERTZ ENCOURAGES CUSTOMERS TO REDUCE THE AMOUNT OF PLASTIC THEY USE, BUT HE ISN’T JUDGMENTAL. “WE NEED MILLIONS OF PEOPLE DOING THIS IMPERFECTLY, NOT A FEW PEOPLE DOING IT PERFECTLY.” 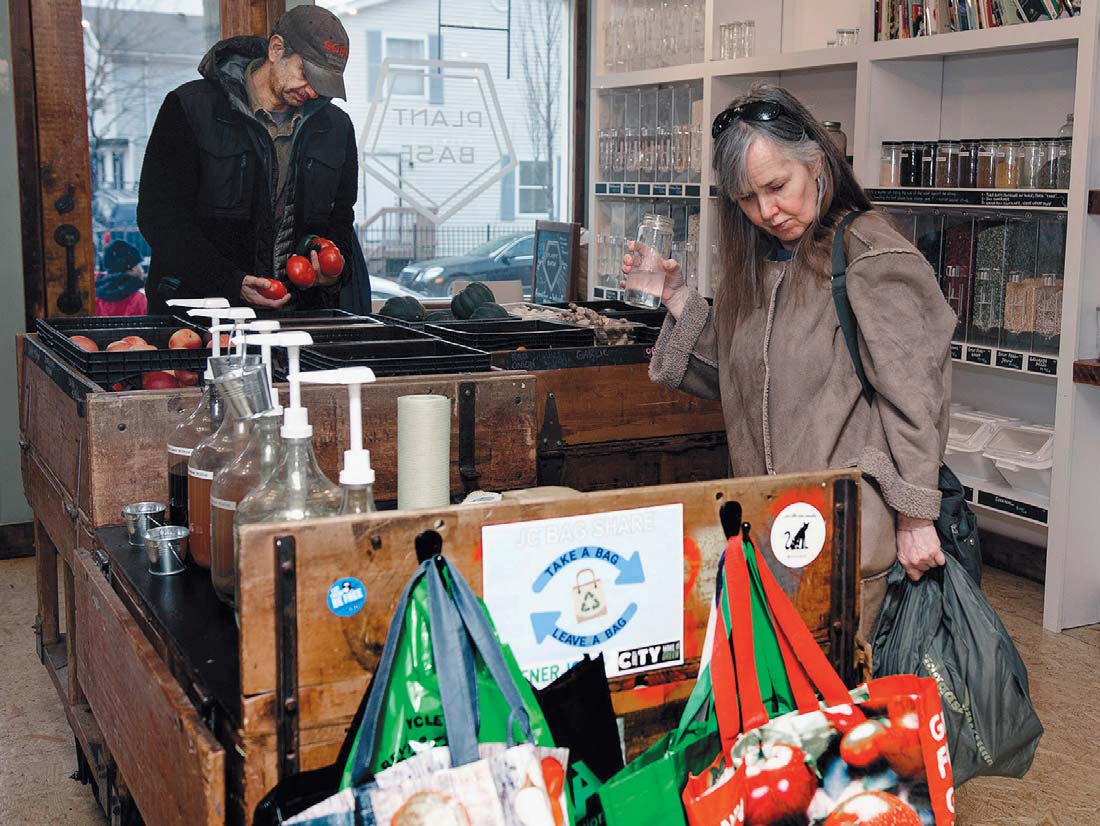 A growing number of everyday consumers are rethinking how much they throw away and where it ends up. Wayne DeFeo, an environmental consultant who counsels private and government clients throughout New Jersey on a number of sustainability issues, says that this boils down to a flawed recycling system. Though many want to do their part for the planet, he says, people are realizing that just a small portion of plastics actually gets recycled. Instead, most of it ends up in landfills (a study of all plastics ever made published in the journal Science Advances in 2017 puts that number at only 9% percent recycled, 79% in landfills and 12% in incinerators).

When faced with that reality, what’s a conscientious consumer to do? DeFeo says many, like Ibarra, have shifted their focus to avoiding sending food and packaging waste to landfills in the first place—and package-free stores like Plant Base help them to do so. “These stores are an example of the market responding to consumer demand.”

That market demand, he points out, extends beyond small, independent businesses. Supermarket giants such as Aldi and Trader Joe’s have publicly pledged to use less plastic. Products from major brands, such as Tide and Haagen-Dazs, are now available to buy in refillable bottles in a growing number of zip codes in New Jersey and beyond from the subscription service Loop. Bulk sections, long popular in health food stores and co-op markets, are getting increasingly popular in mainstream stores such as Whole Foods and Sprouts. And another low-waste concept arrived in New Jersey a few months after Plant Base: Good Bottle Refill Shop in Maplewood offers a roster of 50-plus bath, body and cleaning supplies; shoppers fill glass or aluminum jars and bottles from giant pumps (or bring their own), paying by the ounce.

Many retailers and suppliers are also juggling other sustainability challenges, says Linda M. Doherty, president and CEO of the NJ Food Council, such as energy usage, reducing food waste and what removing plastic from the supply chain means for food safety. And then, of course, there’s the price. “While some shoppers may be willing to pay more for more sustainable products, it’s not a universal sentiment,” she says.

To make a significant dent in reducing packaging waste, DeFeo says, sustainable goods and shopping habits can’t be just for people of means.

Hertz agrees. Plant Base keeps prices low by making as many products in store as possible—from body lotion ($12) to toothpaste ($8), mustard ($6) and vegan mayo ($4.50) to almond milk ($5.50 for a quart or 17 cents an ounce). Hertz and LaTorre also aim to keep meal costs low, from $6 to $12 for an entrée and at least one option on a sliding scale for those in need. The store’s chef uses leftover produce from the shop in the kitchen, creating vegan comfort food dishes. Buying in bulk, Hertz points out, is often much less expensive than buying pre-packaged quantities, especially when shoppers are able to grab just a scoop or pinch of what’s needed.

In Jersey City, single-use plastic bags have been banned. Yet DeFeo argues that consumer demand can effect change more quickly. Change is more likely to happen with urgency at a town or city or individual level. “There’s a shift,” he says, “because of people.”

For now, Plant Base is still finding its footing in Bergen-Lafayette, continuing to try to make things on their supply side as low-waste as possible, figuring out what shoppers want to buy and eat and scouting more locally made products, from vegan baked goods to kombucha. Hertz and LaTorre are also planning a host of community events, from guest speakers to vegan cooking classes to waste-reduction workshops.

Ibarra believes locals will continue to embrace Plant Base as the shop grows. “They’ve done a good job of making everyone feel welcome. It’s very down to earth, not pretentious.”

In their small shop on Pacific Avenue, Hertz and LaTorre always return to a mantra of doing the least amount of harm. Whether that’s by changing your diet or habits, the point, Hertz maintains, is to conserve where you can—even if you must leave behind some of the conveniences you’ve become accustomed to as a modern consumer, such as miniature bags of chips and trail mix, drink-then-toss coffee cups and jumbo rolls of paper towels.

Once you start, he says, “it’s really not a huge burden.” 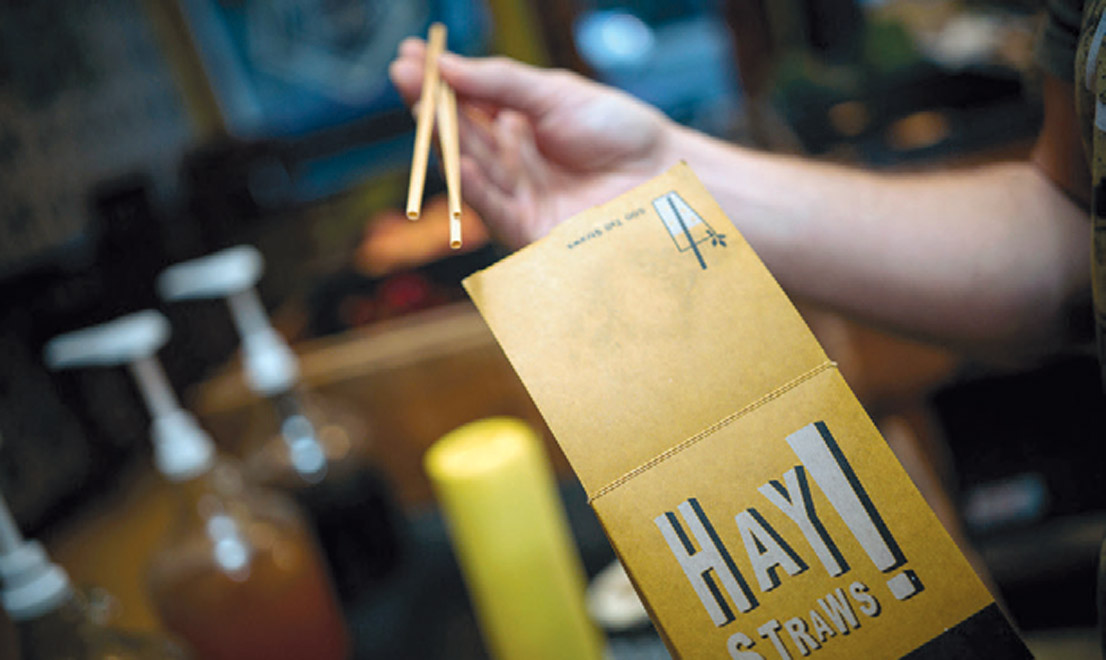 Here are some tips to get started. 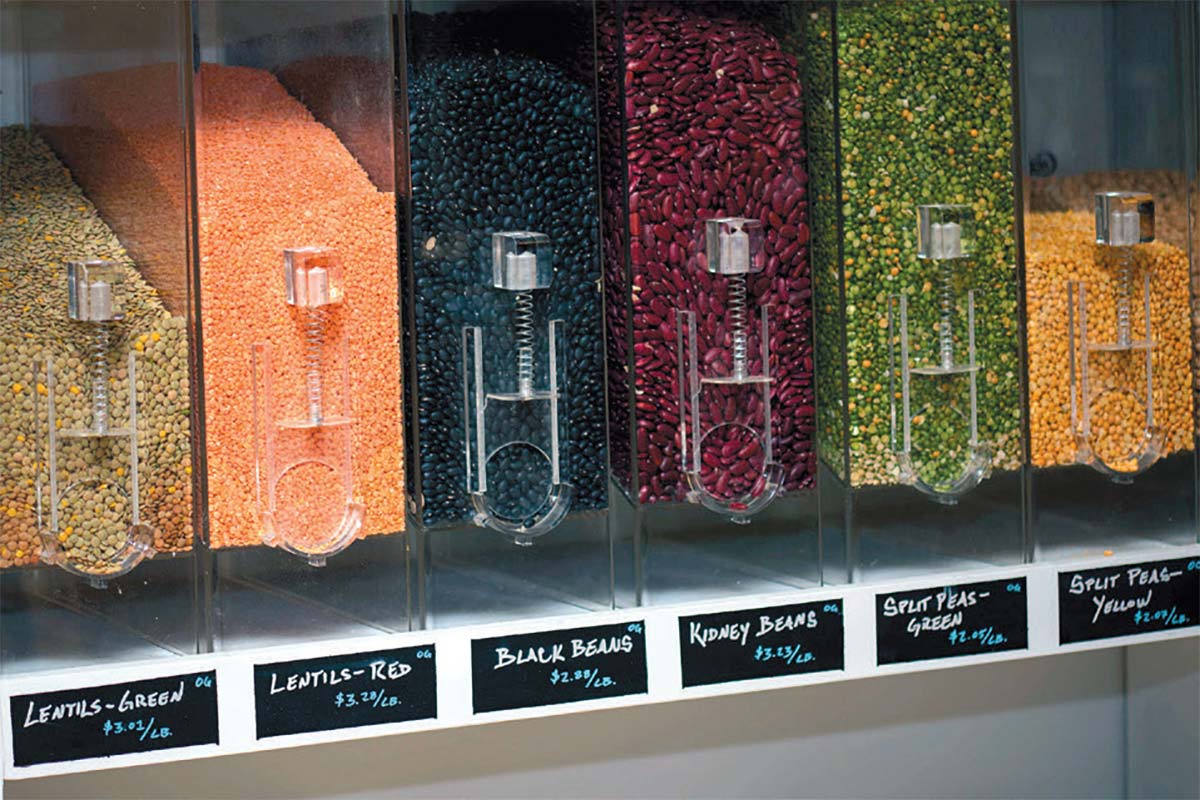 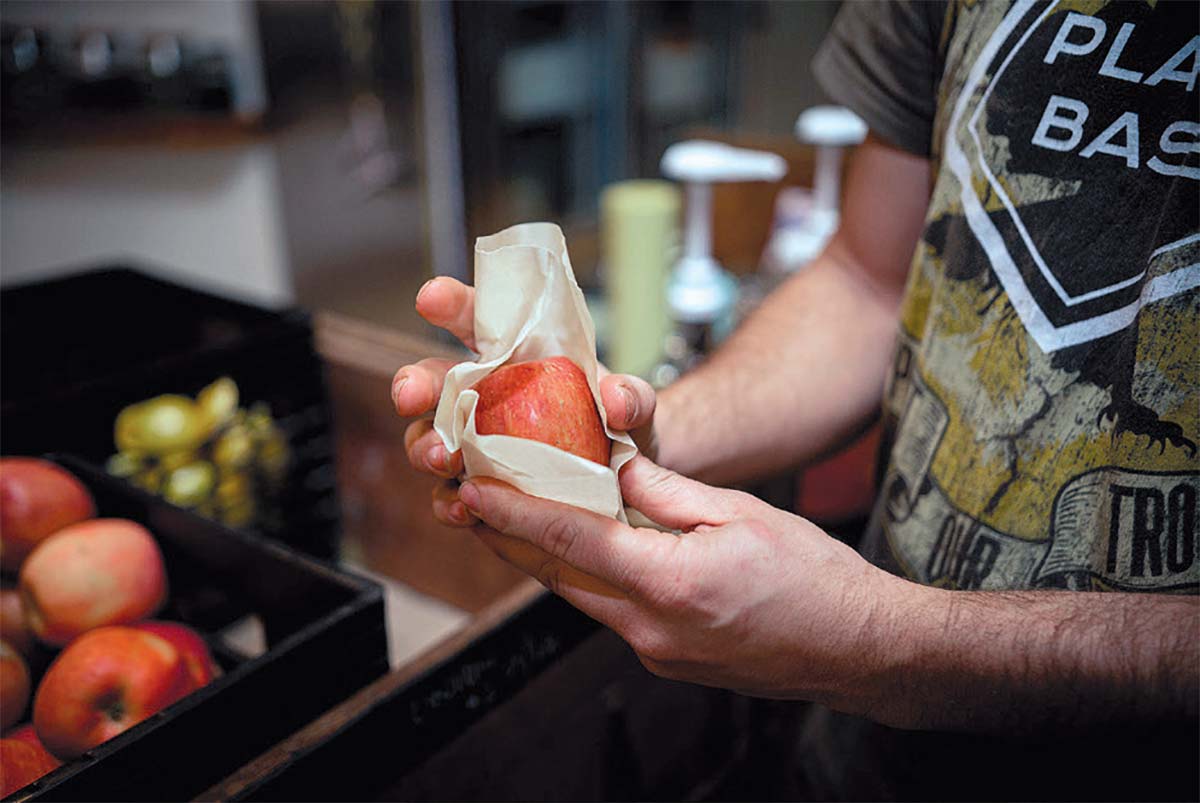 OTHER SHOPS IN NJ ALSO SELL FOOD IN BULK AND WORK TO ELIMINATE WASTE:

see all
Article from Edible Jersey at https://ediblejersey.ediblecommunities.com/shop/plant-base-jersey-city-determined-change-way-we-shop